Realtors Are Saying the Market is Slowing - But I thought it was HOT? What's going on?

Realtors Are Saying the Market is Slowing - But I thought it was HOT? What's going on?

GroupThink.  What is it?

According to VeryWellMind.com, here's a definitiion:

Groupthink is a psychological phenomenon in which people strive for consensus within a group. In many cases, people will set aside their own personal beliefs or adopt the opinion of the rest of the group. The term was first used in 1972 by social psychologist Irving L. Janis.
People who are opposed to the decisions or overriding opinion of the group as a whole frequently remain quiet, preferring to keep the peace rather than disrupt the uniformity of the crowd. The phenomenon can be problematic, but even well-intentioned people are prone to making irrational decisions in the face of overwhelming pressure from the group.

Q: So how does this apply to Real Estate?
A: Markets move in a "herd mentality."

So, I'll bet that instinctively you know this, but think about the big stock market crash of 1929...or stories of a run on banks.   What happens is that emotions take hold and people tend to rush to the same conclusion.  It happens in real estate too.

In January of this year, we began to hear things like this through the Realtor channels:

This home sale became famous among Williamson County agents, most of whom I spoke with thought it was priced about where it should have sold.   It ended up closing $171,000 over the asking price.   And today...if you look it up in the tax records, the owner's address is in Sunnyvale, California.

Thus began the frenzy in Wilco.

By the end of the month, Realtors were BUZZING about the market and the chatter volume was crazy.  We heard that builders had sold out of everything they had to sell.  Here's an example: 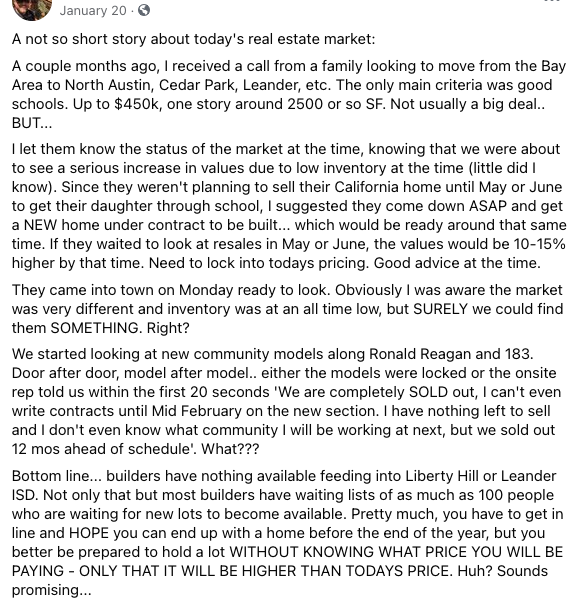 The months that followed were some of the craziest in my nearly 20 years of being licensed.  Money was POURING into the local markets, both from out of state AND locally.   An economist I listen to stated that people had saved cash like we haven't seen since "whenever."  The seller's market was ON.

It's against state law to publish "sold" prices in a public forum like this, but I have a spreadsheet showing homes that sold twice in a year or less and what the annualized appreciation rates were.   Simply staggering.  (I can send that out on a one-to-one basis to prospects interested in buying or selling so email me if you would like to see it. russ @ russ-phillips.com).

We were leveraging relationships with builder reps, digging beneath the surface looking for un-listed properties that could be bought, and building a strategy to work for our seller clients and maximize their results.  I'm proud of the results the Russ Phillips Team has generated for 2021, because when inventory became SO scarce, it was also very discouraging for our buyer agents to lose in multiple offer situations.  We perservered, learned how to succeed, and thus far have helped over 147 families so far this year.

So....now the GroupThink is shifting to "the market is slowing."  The chatter has changed.  Here's an example from survey results of Austin area realtors (approximately 1,500 responded): 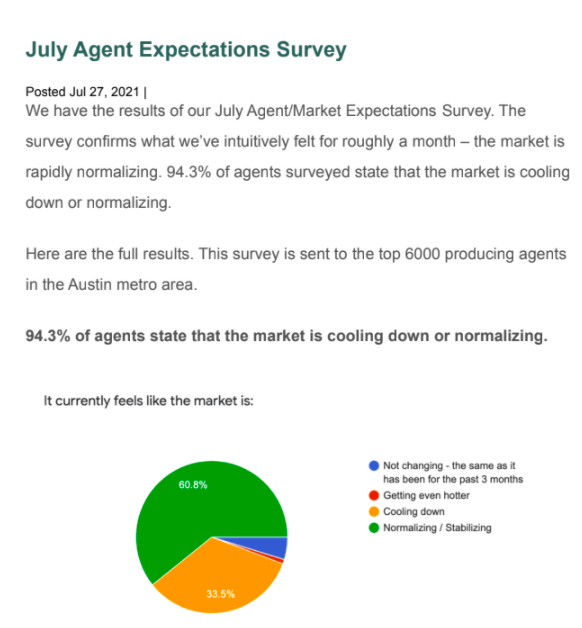 We are starting to see some price reductions in the marketplace from sellers that got too aggressive.  We are also seeing less of a sense of urgency on the part of buyers.   In short, if you are a buyer who quit trying because you were frustrated....it's now a good time to jump back in.

Also, this time of year is seasonally slower.  By now, buyers who are sensitive to school district calendars have pretty well settled in, removing a large number of the buyer population.  You can see the seasonal slowdown is an annual phenomenon (with 2020 being an exception). 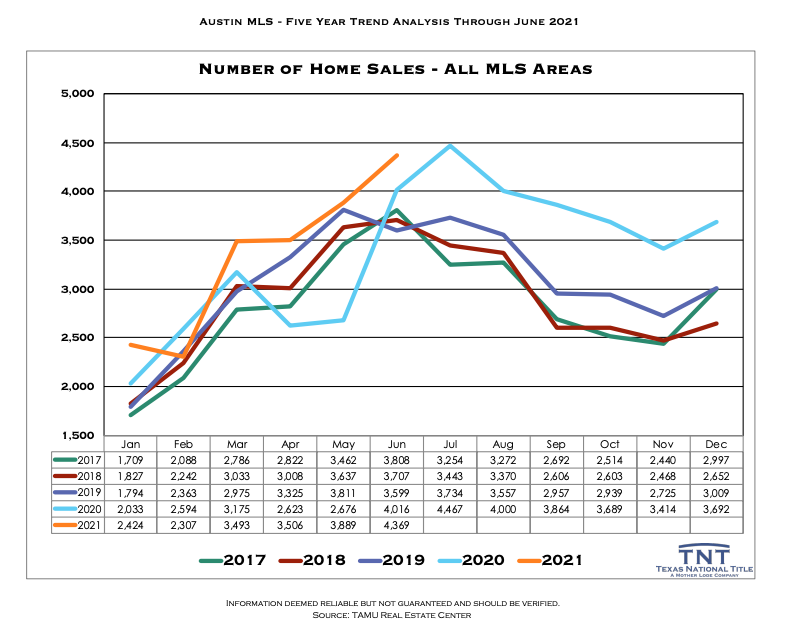 So....where are we NOW?  As of mid-August, the groupthink talk on the Realtor channels says things are slowing.  Here are some of the comments I'm seeing and hearing "out there:"

These kinds of comments and others like them have reverberated for about a month in the Realtor echo-chambers.  And the more Realtors hear this kind of thing, the more they believe it, and it can become a market reality because of the talk.

That said, prices are not really retreating.  You just cannot slap a price tag on a property and expect it to generate multiple offers.

Also, properties with features that are in short supply (like swimming pools, 1+ acre lots, and acreage tracts in general) are still very strong.  In fact, we put a dated home with 1+ acres under contract with 12 offers just a couple of weeks ago.

Here's the thing...if you have a UNIQUE offering, you're still going to see good buyer demand.  Nostalgic homes in "Old Town Georgetown" for example are getting tons of attention.   But if you are in a production-built home and you don't have a obvious "unique selling proposition," then just like always, price/value will be where you'll have to meet or beat the competition.

If you're worried that you overpaid in 2021, or if you're waiting for a "bubble" to burst, don't.   Check out this blog post from local economist, Mark Sprague.

Also, take heart from the local economic report done by David Tandy in this blog post.  The growth of the area, and the strong labor force, combined with so many companies relocating here...it is just hard to say that we won't continue to appreciate for the foreseeable future.  In other words, barring some cataclysmic economic event, it seems like Austin's future continues to be rosy.  Maybe just not as rosy as it was through the spring.

To continue searching, you must agree to the Terms of Use.

For the best experience, please provide your cell phone number and select accept below to opt-in to our Terms & Conditions and Privacy Policy to begin receiving text and voice communications.

or make a new notebook

Search the full MLS and Exclusive Property Listings.
(Prices and inventory current as of June 27, 2022)

See local market activity affecting the value of
your home & maximize your investment.

We just need your phone number to finish creating your account.